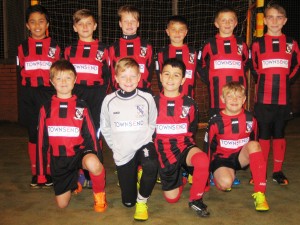 ‘Townsend Futsal’ joined the school year 5/6 futsal league for the first time this season. For all players it was their first experience of the game. We joined the league to assist in improving the players’ technical ability and general development. I believe Futsal achieves this in many ways.

The speed of the game encourages speed of thought as most of the time you are receiving the ball in a tight situation; this also encourages quick feet, agility and movement within the pitch/court. It also helps improve their control and passing as they receive the ball more often than they would in a 7 / 9 or 11 a side game, in a variety of different positions and under pressure from their opponents. To be comfortable in these situations helps develop their confidence to receive the ball. It also gives the players the need for some great skill and tricks. All are fantastic attributes for a player to have at any age.

Although the team have been on the end of a few heavy defeats, as there are some very good teams, some of who are school year older, I believe the team have acquitted themselves very well. Win lose or draw it has been mentioned from the sidelines and also in the match reports that their heads never go down and they always play with a smile on their face.

Although slightly biased they scored one of the best Futsal goals I have seen. Every player one touched the ball, at speed, without the opposition touching it, from their own goal to the oppositions, resulting in a nice finish as well, really pleasing to see.

They can all be proud of their efforts in their first introduction to Futsal. Many countries and some of the world’s best players including Pele, Messi, Ronaldo and Xavier have used the aspect of Futsal in their youth development for years; if it’s good enough for those world stars I would encourage any player/team to play Futsal.

Thanks go to the referees as every game is refereed by an experienced ref and also thanks to Kev Bryant for all the time and effort he puts in to local Futsal.’