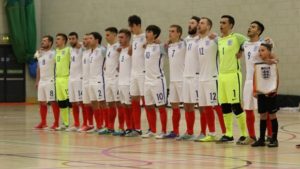 England’s Futsal squad will head to China next month where they will face their hosts, Malaysia and Czech Republic in a friendly Four Nations Tournament.

Three Lions head coach Michael Skubala has selected a 14-man squad for the trip to Changsha in Hunan Province, which looks a youthful group with some debutants in the squad making the step up from the development sides.

The team will play three matches in Changsha across three days, starting against on Friday 23 June. Further details of the fixtures, venues and times will be updated in due course.

“It’s a great opportunity for me to look at some of our younger talent coming through in senior games that I know will be of the level and environment that will test them,” said Skubala ahead of the trip.

“The way the tournament has been put together is great and I know China will put on a great event, the three games back-to-back is a tough test for the Futsal Lions, especially for the younger players who are still gaining valued experience in these types of friendlies.”

There is expected to be a big crowd in China for these games, with Futsal forming a big part of football development in the Asian nation and with England one of the lower-ranked teams in the tournament, Skubala is expecting some tough games.

“For me, opportunities like this are important for us to develop and part of that development is playing teams better than us like Czech Republic, who are a top 20-ranked team in the Futsal world,” he added.