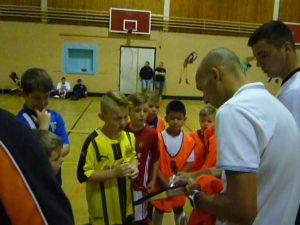 Futsal: it might look like a simple game, but playing it well is far from easy. It takes a level of technical and tactical understanding that can take years to develop.

Luckily, there are those out there who already have this knowledge and are generous enough to share it. The following 25 tips for futsal have been put together by elite level futsal players and coaches (credits below), with decades of combined experience in the game.

They’ve distilled down the complexity of the game into simple technical and tactical rules: 25 maxims that you can bank on making you a better player, and improving your team. Learn them, live them, love them.

The above list has been reproduced (with small amendments) from “FUTSAL: Technical & Tactical Concepts” by Dr. Daniel Berdejo-del-Fresno, Jonathan Steel and David Jennings.

This has been done with the permission of Dr. Daniel Berdejo-del-Fresno, who, among a host of achievements, is Sports Scientist / Strength & Conditioning Coach for the England National Futsal Team and has plenty of experience with elite level futsal players.

Daniel has generously made his book available free for download on his blog:http://danielberdejodelfresno.blogspot.co.uk/2015/06/book-released-futsal-technical-tactical.html It contains lots of futsal tips, techniques and tactics – definitely worth downloading a copy.