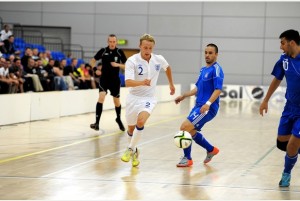 Standard of junior futsal is ever on the rise; under 16 futsal has 3 divisions of 24 teams all highly competitive and knowledgeable about futsal. Walked into YMCA last week and a spectator asked me about the teams he was watching, he was amazed that he was watching two bottom teams; he thought he was watching the best.

GTFC futsal BTEC have rightly plundered the league to give playing and education opportunities to seven players, they may be more I don’t know of.

Previous GTFC futsal team captain Jack Burrows rang me to try arrange half term coaching, being on the course has worked hugely for him. He is now at Loughborough University and trains with England under 18 futsal team, whilst being on radar of Scottish FA.

The next age group down, school year 8/9 is just starting to populate, needs two more teams if you know of any interested please pass on my contact.

School year 5/6 has just jumped to two divisions of totalling 13 teams. How GTFC cannot produce players from the outstanding stock in this town is beyond me, the raw talent in this league is outstanding.

One parent wrote * had his review at Scunthorpe United and they have signed him for next season he is so happy having the opportunity 🙂 Futsal is so good for his development.

Senior futsal is having mixed time; the current teams have played so much futsal those newcomers struggling to compete. Frustrating that so many players of an age they should know better, want an easy life of 6v6 or worse still kicking a ball off a wall rather than meet the demands of futsal. Demands that improve the aspiring footballer. Look at the UEFA Cup semi finals, Gareth Bale the only non futsal player I could find.

Week after week I post statements by top players how futsal has given them the edge and still people ignore the obvious.  Chelsea might be the top English club, but all done with minimum of English players, futsal is the both the key and the answer.