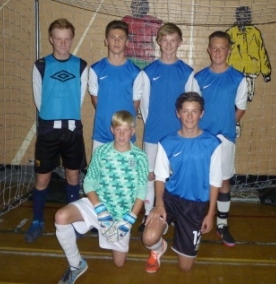 Congratulations to Clee Town who, after a slow start picked up pace to win the Novartis under fifteen league. One draw and 11 wins in their last 12 matches took sting out of Lions who had two losses and one draw in same period. Lions roar will be muted as they lead table for most of season, win their final game and they will have been piped by one point in 20 games played.

Drama of futsal in same league Spartans had GSC 5-1 only for GSC climb back to 5-4 and then a penalty with the clock stopped; 5-5.

Wednesday senior league putting together a string of top matches, referee John Drew would rather be at Second Avenue (most nights) than watching UEFA matches on TV. Such is the standard and tightness of games. GSC seniors are playing great futsal, Clee 5’s are surprising everyone, Me2 are Me2 and Saxons are missed and Franklin and 1Goal2Cups have joined league (both experienced teams. Title winners – place your bets now.

On the wider front Ben Mortlock, who hails from Grimsby and played in league, is in next England squad vs. Wales, must be approaching 40 caps.

Not connected to futsal, but a local player, Adam Drury continues to feature in the Manchester City U21 team.

Have a just published copy of the state of English futsal which I will put on site once permission is granted. It starts by quoting FIFA who say 360 million play futsal worldwide every week with more South Americans playing futsal than football.

A new year 7/8 league is about to commence, currently we have 7 teams playing friendly matches, three more and we are ready to go.

Good luck to Valiant in their quest for FA Futsal Cup glory this Saturday 15th in Leeds.