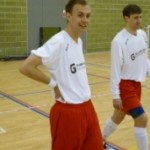 LFA has allowed me to nominate a County under sixteen team to represent the County in the FA National Junior Futsal Cup. Such is the standard of the league I shall be requesting that they accept 2Goals1Cup who took Titans’ to the wire. It needed a playoff match to separate to great teams. No promises but will ask.

Playing for YMCA Spartans keeper ‘Ryan’ was given a tight delicate back pass to deal with inches of his goal line; he quickly moved the ball out of his feet and chipped the opposing goal keeper. Ryan had a space the size of the ball to aim at and he hit it!

Radio Humberside got wind of our coach visit from Barcelona Futsal Club February 16th.  As a consequence I went into Grimsby office and did a live link with Burnsy.  Limited spaces left for junior u10 players 235704/07980286663.

League stalwart Matty Payne is back playing after a serious illness. Great to know your fit and well and pleased that you are linking with Grimsby England star Ben Mortlock at Sheffield FC futsal club.

Both the Thursday (11/12) and Novartis (9/10) leagues growing in numbers allowing leagues to be split into two divisions, more enjoyable for lower table teams but demanding challenge for top end teams.

Thanks for your support.