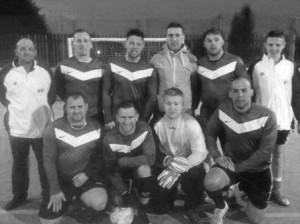 I no choice but to review how the league is organised, to many teams are requesting a change of kick off time etc. without realising the potential consequences  in making that one simple change.

This week I have had one Wednesday fixture where one team wanted week off and the other a different kick off time, at least 30 text messages have been passed back and forth on this one game. Guess what after two days of trying we are still left with same game same kick off time.

New year 7/8 Junior league team wants later kick off as one player has school athletics, I change game and disaster, the team that moved from 7pm ko to 6pm ko turns up at YMCA on wrong day.  The team I moved to 7 is now playing team they played last two weeks in pre league friendly games; at least they will know each other well.

One team wanting a change involves three other teams agreeing. A recipe for disaster.

Tuesday year 4/5 League, last two weeks a team has been unable to field team, great that I know, but fixtures collapse as a result, particularly at end of league when I am clearing up last games and have no un-played matches to juggle with.

Current rules are that if a team cancels with less than 48 hours notice they lose game 5-0 (FIFA rule) and concede match.  This rule will be updated that if any team, regardless of time , cannot fulfil fixture they concede game to their opponents 5-0 and  pay both teams match fee for lost match.  Harsh but I cannot continue spending hours sorting what on the outside appears to be a simple request.

Year 9/10 league has a team always wants last match, no problem, but team did not turn up, apparently3 out of 3 texts to different persons on team did not arrive. Tex-ting is great and useless at same time, great if texts leave and are at their destination within minutes, useless when my messages get stuck in system for days, as they do!

A new process is that all teams, without fail, must affiliate to league and all players sign on individually. Forms are at www.grimsbyfutsal.co.uk just click on ‘forms tab.’ A rule change will be added, subject to LFA ratification, that teams who do not complete paperwork will lose points as a consequence.

Lets finish on a good point, Franklin vs. Me2 All Stars, Tuesday League, absolutely brilliant game.