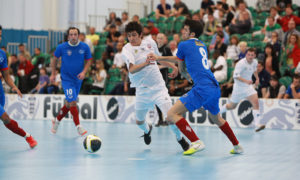 From my viewpoint as a referee and a coach of many years experience poor defending is a facet of play many of our teams need to address. Just how much time are teams spending on 1v1 defending? The FA looked at their own FA Coaches Association exhibition drills, drills performed over many years; only 20% was defencive drills.

Last two weeks I have had three teams concede free 10 meter free shots at goal because of accumulated fouls, worse still I have red carded two junior players after giving them two yellows for fouls that was easily avoidable.

Take a look at attached video, the maker was making a video to illustrate player movement and strategy with the ball. Watch the video twice, once concentrating on the attackers and then homing on the defenders. They are not charging in to make early physical contact; they are patient – organised – poised to counter attack when opportunity arises. They are not risking loading the foul count, they are organised as a unit to counter every attacking threat thrown at them. They are composed not aggressive.

An associate of mine has just spent six years goalkeeper coaching in France. He says both teams he worked for had a ‘no ball’ session every fourth week. This allowed them to talk, demonstrate and analyse with players individually and as a group. Should we be doing similar?

Defending is an art, let’s make it that way for our teams.