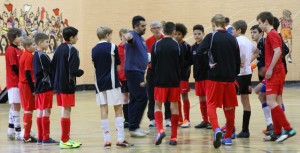 My lows will be nohing compared to pain Sam Malone felt with a career threatening broken arm caused by fall during a year 11/12 match. An incident best say no more about as the outcome is with the LFA and other bodies.  Not sufficient for one week ‘Fazza’ is taken to hospital during a year 9/10 league game with serious breathing problems.  I know Sam has received a huge number of messages of support, to both players the league wishes you a speedy recovery.

Feedback from Carlos and his all too brief visit is that he enjoyed working with us and would love to return. A larger Barcelona inspired half term football/futsal course is on agenda.

I have 3 teams ready to form a school year 7/8 league, with a possibility of three more. Please get message out to teams you know via Facebook etc.

On and off I have coached futsal at the YMCA 20 years – this week Everton endorsed it was only way forward for their under 13 players!

Bad news for SoSoBad but LFA has only been able to endorse one team, Titans, for 2014 under 16 FA Futsal Cup.

The LFA said in an email to me:

County nomination process and we use the School Network as our platform to promote FUTSAL and deliver FUTSAL as a County qualifying competition.  FUTSAL is defiantly growing and we have experienced that first hand this year and are extremely proud to highlight we have had over 190 FUTSAL teams take place in Level 2 School Competitions across Under 12 (Boys & Girls) and Under 14 (Boys & Girls).  As a result of the quantity of competition at Level 2 events, we will be welcoming 32 teams to our County Schools Final Day on the 13th March, to compete for the Regional Youth Festival Position, this is 8 teams across all categories.