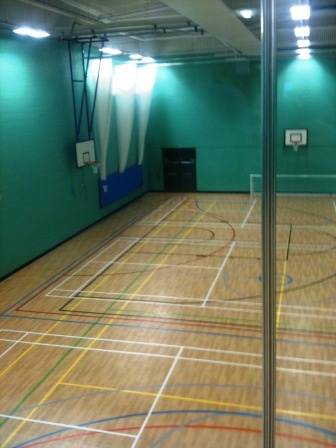 The preview photo sent me of the new Grimsby Institute indoor sports facility, as yet not open to the public suggests that after repeated request to include a futsal court, none is included in the miss match of markings. The picture shows the venue with goals that do not match the size of those stipulated by FIFA for small sided football?

As a result Grimsby will not have a home futsal court to allow representation in the FA National Futsal League. The fact that futsal is (apparently) not included means hand ball is omitted to with both share the same court and goals. Similarly the same goals are shared with indoor hockey that can adapt to same court. A disappointment for three sports.

Every professional football club, Grimsby Town included, is running two year futsal and A Level education courses. Given the sporting links between the Institute and GTFC have both missed a golden football opportunity?  Click to read more about courses.

UK futsal doubles in size every year, Grimsby lead the way national, now we are being left behind.  Six badminton courts is great, another basket ball court, no problem, but compared with futsal these are small sports played by minority groups, groups that because of their limited facility usage don’t pay the bills, so why every time are they included to the deference of FIFA’s only recognised small sided football game (futsal)?

Over 60% of each weeks Premier league footballers honed their skills playing futsal, not mini soccer or ‘off the walls’ 5 aside, they learned by playing Futsal. The city of Barcelona has no grass football pitches but produces great football players! Draw your own conclusions.