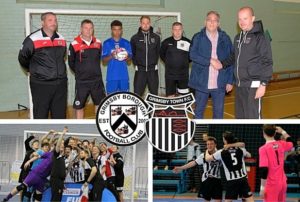 This photo plus some great pictures of GTFC futsal team vs. Norwich available to purchase from Telegraph

The Mariners’ Sports and Education Trust (GTSET) have joined forces with Grimsby Borough in order to develop their up and coming stars even further.
The new partnership will give Borough’s young players the chance to work on Town’s futsal scholarship – which has proved to be a huge success story for the club in recent years.
The Mariners swept the board last season, winning every trophy available to them.
And, as Town’s futsal co-ordinator Mark Westerman explains, with the chance to pull on the Borough shirt as well as play in one of the country’s top futsal sides, they could be set for even more success in the future.
“The benefits for us and Grimsby Borough is we get to work with their players, and they get to go back and play football with Grimsby Borough at the weekends, so we like to think we’d be helping to improve them as players,” Westerman told the Telegraph.
“The Grimsby Borough lads who come in will be coming in with other lads to form next year’s squad, so they’ll be joining in September for two years.
“At the minute, we have lads who come in from all over the area.
“But we hope that now we’ve got this link with Grimsby Borough, we can start signposting lads from us to Borough, so not only are they playing futsal together, they’re playing football together long term.”
Futsal is a small-sided form of the game that is popular in Brazil and credited with honing the skills of Samba superstars such as Ronaldinho and Neymar.
The partnership promises to be a great opportunity for Borough’s next generation of players, and development co-ordinator Matt Bryant is excited at what it offers for the Wilderness Boys.
“It’s a fantastic opportunity for the lads to progress, not just in sport but in their education,” Bryant said.
“Looking on the court, there’s eight lads training with Town who represented Grimsby Borough last season, and there’s potentially two more coming to the club.
“It would be great to have them in a controlled sports atmosphere five days a week – it’ll benefit them as we’re trying to create a pathway to our first team so we can provide more local players through the setup.
“We practice with all the age groups from a young age on a Saturday morning and in midweek with Grimsby futsal league, so we believe in the ethos of what futsal does in giving the players better skills.
“It’s a massive honour to be partnered with this scholarship. It’s already hugely successful, and hopefully it will help take the Grimsby Borough lads up to a new level.”
The partnership has been in the pipeline for a number of years, with both clubs eager to develop their already impressive youth systems further.
And GTSET tutor Scott Drury, who also plays for Borough as a goalkeeper, expects it to have benefits for players in both futsal and football.
“Last year, it sort of fell naturally into place with a lot of Grimsby Borough lads coming onto the course, and they’ve gone back into the under-17s and 18s squads at Borough this year and done really well,” Drury said.
“I spoke to Matt and said ‘there’s something that could happen here’.
“This year, we’ve made it official, and hopefully next year there will be more Grimsby Borough under-16s signing up for a scholarship.
“There are big links in the transition between futsal and football, the skills are very similar, and one of the players on the scholarship, Liam Hulse, has played for Grimsby Borough’s first team, so it shows that we’re improving them in both aspects.”