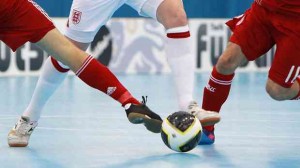 Robinho, being interviewed in his native Brazil after playing Futsal, once said “I think strength will never beat intelligence”.

We had the incredible opportunity to speak to Simon Wright of The FA who, as you will read below, is charged with growing small sided football across England. One of Simon Wright’s core pillars of growth is around the game of Futsal, something he has spent a large portion of his career supporting, championing, and help popularise within the English game. We dig deep into the mind of someone who has been close to the heart of this mini-revolution that is starting to pick up speed.

If you’ve ever wanted to know more about Futsal (as a coach or player), what it means in England, how you (as an adult OR child) can get involved, what the future holds for the state of small sided football (SSF), and where we as England are headed as a nation – this interview with Simon Wright will hopefully answer everything you’ve ever wanted to know – and more. An informative an enjoyable read.

CLICK TO READ – Simon Wright Of The FA: Exclusive Interview

If there was ever a game that can help drive, inspire, and create technical players…Futsal could very well be it. So, why Futsal?

Futsal is important as it helps –