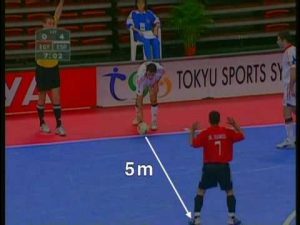 Had a week when my thoughts have drifted to ‘why bother’. All through the junior leagues I have little or no bother refereeing. It’s the plus 18 that lads I have watched, some age nine, have become unpleasant to referee. Where does this know all attitudes coming from?

Wednesday night one lad twice kicked the ball away because he did not agree with a referee decision. Two yellow cards make a straight red. No referee wants to go down that route so why push the referee into that position. The player got himself sent off. Did he see that way, of course not.

Law 15 is the ball into play Law. The Law states an opposition player cannot be within five meters of the person taking the kick in. Nowhere in that law does it say the person taking the kick-in has to ask for opposition to drop five meters. I get player after player, all for some strange reason, aged 17 – 20 who assures me they know otherwise and I am wrong. According to the laws I have bothered to read and, re-read, I am right. Do they apologise, don’t hold your breath.

I’m worried that there is a generation of players who get more from football by lambasting the referee than the game itself. So many times the referee faces a no win situation, every player appealing for every push shove or ball out of play to go his teams way. Both teams appeal, referee is left with no option but to please one team and not the other.

I accept I come from a different generation, what was an okay tackle in the 60’s is pulled up today. What was different was the team captains, being captain you had to be an okay player, more than that he, (no ladies games back then), was a stalwart of the community. A solicitor, company director, engineer, doctor, someone as a player I looked up to and respected. That’s the whole point of being a captain/manager you set the tone the example.

Roll on Rugby World Cup Final. Thirty men knocking seven bells out of each other but still managing to respect the referee at the same time. They know as we all know without that referee there is no game.

If you don’t want to respect the referees then at least read the Laws and respect them. Standing five meters from a kick-in is not rocket science.